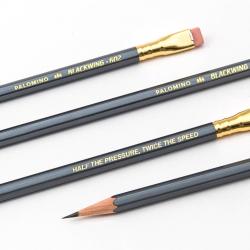 Praised in the New Yorker, The Boston Globe, and Boing Boing among others, the Palomino Blackwing 602 features a firm and smooth graphite core that helps it deliver on its promise of "Half the Pressure, Twice the Speed." Blackwing 602 pencils feature a gunmetal grey finish and iconic square Blackwing ferrule with a pink eraser. Blackwing 602 pencils come in packs of 12.


Blackwing pencils were originally introduced by the Eberhard Faber Pencil Company in the 1930s. Their cult following included John Steinbeck and Chuck Jones, who proudly used Blackwings to create Bugs Bunny and many other Looney Tunes characters.

Despite this following, they fell victim to cost cutting measures in the 1990s and were discontinued. But, that didn't stop devotees from paying as much as $40 per pencil to seize unused stock. In 2010, our company drew from nearly a century of experience in the pencil business to access the best materials in the world and bring Blackwing back for a new generation of writers, musicians, and others seeking a more natural existence.

Today, a portion of every Blackwing sale benefits music and arts education at the K-12 level.