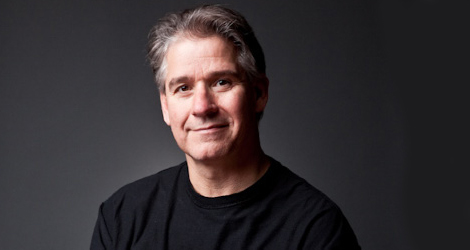 Bryan Gruley is the critically acclaimed author of Starvation Lake: A Mystery, and the sequel, The Hanging Tree. The paperback version of his third Starvation Lake mystery, The Skeleton Box, will be published June 4. Bestselling author Sara Paretsky calls Bryan “a gifted writer” who in The Skeleton Box has “turned his gifts to the secrets and lies which ultimately rip apart Starvation Lake.”

Starvation Lake was nominated for an Edgar Award for Best First Novel by the Mystery Writers of America, and won the Anthony, Barry, and Strand awards.The Hanging Tree was a #1 Indie Next pick and was named a Michigan Notable Book for 2011 and a Kirkus Reviews Best Mystery of 2010. It was also nominated for Barry and Anthony awards and has been optioned for a movie by writer-director John Gray.

Reviewers have compared Bryan to novelist Dennis Lehane. Secretly, though, Bryan would love to be compared favorably to Detroit Red Wings stars Johan Franzen and Pavel Datsyuk. He’s been playing hockey since he was a boy growing up in Detroit, and still plays regularly at Johnny’s Ice House in Chicago. Hockey plays a role in the life of the fictional town of Starvation Lake, as do two of Bryan’s other passions, northern Michigan and newspapers.

He and his two brothers and three sisters have spent many weekends at their family cottage on Big Twin Lake in northern lower Michigan—not far from the real Starvation Lake. Bryan had his first newspaper job at the nearby Antrim County News in the summer of 1978.

Bryan is a reporter-at-large for Bloomberg News, writing long-form features for Bloomberg Businessweek magazine. He previously spent nearly sixteen years with The Wall Street Journal, where he shared in the 2002 Pulitzer Prize for coverage of the September 11 terrorist attacks. He lives in Chicago with his wife, Pam. They have three grown children, Joel, Kaitlin and Danielle, and a grandson, Sawyer, on the way.