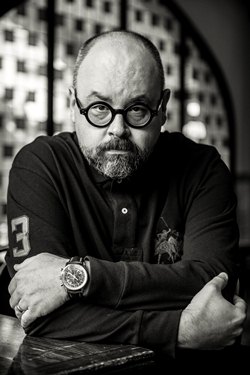 Spanish novelist Carlos Ruiz Zafón has died at the age of 55.

Ruiz Zafón was best known for a quartet of books known collectively as the Cemetery of Forgotten Books, which includes The Angel's Game, The Shadow of the Wind, The Prisoner of Heaven, and The Labyrinth of the Spirits.  The first to be published, The Shadow of the Wind, has sold more copies than any other Spanish novel except for Cervantes' Don Quixote, according to Ruiz Zafón's publisher.  When it was first released, however, The Shadow of the Wind was largely overlooked by critics, gaining its acclaim gradually by word of mouth.  By the time he released the second book in the quartet, the prequel novel The Angel's Game, the books had become blockbuster bestsellers and went on to be translated into more than 40 languages.

Though it was his writing for adults that brought him international acclaim, Ruiz Zafón began his career in as a novelist by writing for young adults.  He was quite successful—his debut novel, The Prince of Mist, won a sizable literary prize, which allowed Ruiz Zafón and his wife to fund a move to California from their native Spain.  Though they later returned to Barcelona for a time, Hollywood held a particular allure for Ruiz Zafón.  He worked for a time as a screenwriter, and the influence of cinema is equally pronounced in his novels.  "Film and visual storytelling are an essential part of what I do, of the way I think," he said in a 2009 interview.  The sweeping scale of his storytelling bears that out, though Ruiz Zafón also cites authors like “Dickens, Balzac, Victor Hugo … the grand sagas with characters that stay rolling round the reader’s mind,” as sources of inspiration.

Diagnosed two years ago with colon cancer, Ruiz Zafón died at home in California on June 19th.  His most recent novel released in the US was The Labyrinth of the Spirits (2018), the fourth and final installation of The Cemetery of Forgotten Books quartet.

The Shadow of the Wind (Paperback)

The Prisoner of Heaven: A Novel (Paperback)

The Labyrinth of the Spirits: A Novel (Paperback)

The Prince of Mist (Paperback)