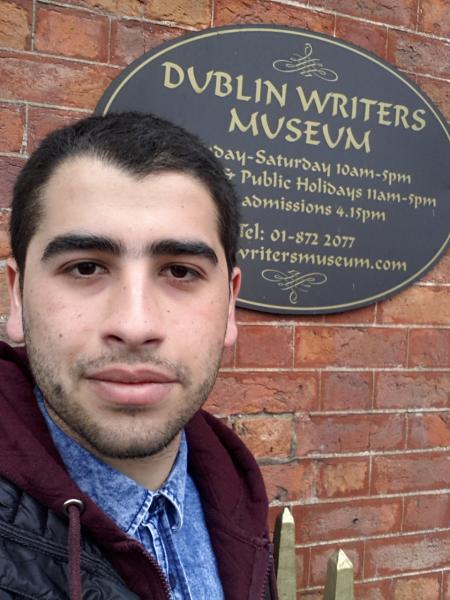 Christos Kalli, born in Larnaca, Cyprus, is currently studying for his undergraduate degree in English Literature at the University of Glasgow. His poetry has been translated into French, shortlisted for the Jane Martin Poetry Prize, and his INT. NIGHT was a finalist for the Sutra Press Chapbook Contest. It can be found or is forthcoming in The American Journal of Poetry, The Adroit Journal, The Los Angeles Review, the minnesota review, [PANK], and Barely South Review, among others. He is a Poetry Reader for The Adroit Journal. Visit him at christoskalli.com

What first inspired you to write?

I started writing poetry in the army, when I was 18. There wasn’t anything particularly inspiring in the army, and, in fact, the majority of the time we were doing absolutely nothing. And for me, for that reason, poetry has this amazing generative and regenerative power because it finds ways to infiltrate your life even when there is not much life there to be infiltrated. So, in many ways, my writing began not with inspiration but lack of inspiration, which remains somewhat true today. I needed to fill the void of that new environment and I did so by writing poetry. What I wrote then, of course, couldn’t immediately be called ‘poetry,’ per say, but small poetic fragments that occupied me while they were produced and while they were read and re-read.

Do you have a schedule to your writing routine or particular habits you always stick to?

I don’t have a routine but I do have certain fetishes. For instance, I like to watch people walking around or talking in their groups. I mostly write on my laptop but I also keep a pencil and a notebook close by. I prefer quiet noise rather than complete silence, and I often write in coffee houses or on my bed. I start a new poem only when I know that I will have enough time to finish it because I have enough unfinished and neglected poems as it is.

What's the first thing you do when starting a new piece of writing?

When I know the area I will be writing on/about, I read. I read whatever I can find that has dealt with that subject and I collect words, phrases, techniques I like and techniques I want to avoid exercising. Then I write what it is I am trying to prove, vindicate, question, doubt, or criticize with this poem. So, in other words, I try to establish an agency before I go into the formal and linguistic practices of the poem. I suspect, however, that this will change soon.

As depressing as it sounds, my least favorite thing about writing is the composition part. I love researching for the poem and, of course, finishing a poem. I get dangerously nervous with the decisions I have to make while I am writing.

Do you let other people read your works in progress?  If so, whom?

Yes, I share some of my poems with a small number of trustees but only after they (the poems) start making some sense. I prefer not to name names, but their edits have been – and will hopefully continue to be – invaluable.

How do you know when a piece is finished?

Sometimes a poem just reads/sounds as finished as it can be. And, after years of reading poetry, I understand that you can over-edit, and, if possible, over-finish a poem, which compromises some of its beauty. Who is to say that ‘unfinished’ means ‘bad’? Yes, in poetry the two words are occasionally synonymous but I often find unfinished poems to be the most readable ones.

Can you tell us about a piece you are particularly proud of?

Yes. When I finished the poem "Body Brimming with Achilles’ Heels" (now published in The Adroit Journal) I thought that it was the first time that I executed a poem in a professional and intellectually substantive way. I was thinking about (some?) mothers’ unrealistic expectations and how the myth of Thetis and her son Achilles show the poisonous effects of those expectations. The poem, in my opinion, communicates important questions in an efficient and effective way: How does it feel to have to respond to our mothers’ expectations? Why are those expectations representative of what’s anticipated from us by society? Why are we affected physically as well as mentally? What are the consequences if we choose to ignore them?

Whose writing inspires you?

Who are you currently reading?

I am belatedly reading Saeed Jones’ Prelude to Bruise, John Ashbery’s Self-portrait in a Convex Mirror, and D. A. Powell’s Useless Landscape, or A Guide for Boys. I am also reading fresh collections such as Alex Dimitrov’s Together and by Ourselves, Chen Chen’s When I Grow Up I Want to be a List of Further Possibilities, and eagerly waiting for sam sax’s, Kaveh Akbar’s, Danez Smith’s, and Phillip Schaefer’s books. Some days I like to go back to Kay Ryan, Louise Gluck, Emily Dickinson, and Dante.

Back to Interview Series Homepage