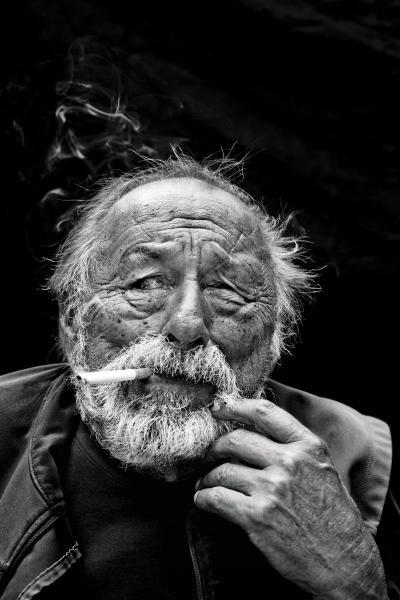 “My advice is, do not try to inhabit another's soul. You have your own.”
-- Jim Harrison

Jim Harrison was born in Grayling, Michigan, in 1937. He received a Bachelor's and a Master's degree in English from Michigan State University and soon began writing full time. Over the course of his career, he wrote dozens of books of poetry, novellas, novels, essays, and short stories. He is best known for his work about nature and rural life. Many of his stories take place in the outdoors of Michigan, Arizona, and Montana, all of which he lived in for several years. His wife of more than 50 years died in 2015, and he died on March 26, 2016, at the age of 78.

“I like grit, I like love and death, I'm tired of irony. ... A lot of good fiction is sentimental. ... The novelist who refuses sentiment refuses the full spectrum of human behavior, and then he just dries up. ... I would rather give full vent to all human loves and disappointments, and take a chance on being corny, than die a smartass.”
-- Jim Harrison

In Search of Small Gods (Paperback)

The Raw and the Cooked: Adventures of a Roving Gourmand (Paperback)

Off to the Side: A Memoir (Paperback)

The Woman Lit by Fireflies (Paperback)

The Summer He Didn't Die (Paperback)