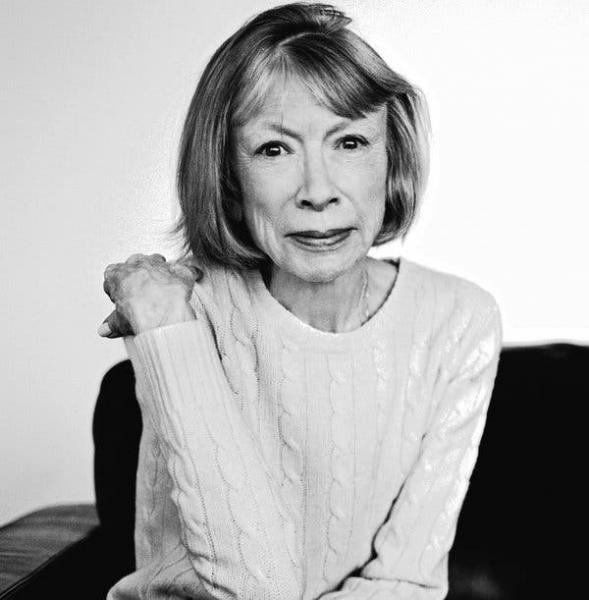 Born in California in 1934, Didion entered the literary world by way of Vogue magazine, where she worked her way up from a research assistant to the magazine's associate feature editor.  During her time there, she wrote her first novel Run, River (1963) — and quickly expanded into the world of nonfiction with the much lauded Slouching Towards Bethelehem (1968).  Over the years, she grew into an icon of American literature, journalism, and screenwriting, known for her smart, personal writing that delved into politics, culture, and the heaviness of human (and often, specifically American) life.

Among Didion's many awards and honors was the 2005 National Book Award for Nonfiction, awarded for her stunning memoir The Year of Magical Thinking.  She also received an honorary Doctorate from Harvard University in 2009, and in 2013, President Barack Obama presented her with the National Medal of Arts.

An unforgettable and imitable writer, Joan Didion left her mark on American culture.  She will be missed dearly.

Let Me Tell You What I Mean (Hardcover)

South and West: From a Notebook (Vintage International) (Paperback)

Where I Was From (Vintage International) (Paperback)