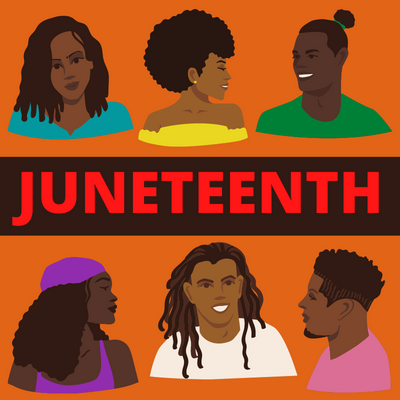 Celebrated June 19th, Juneteenth commemorates America's second independence day: that of enslaved Black Americans.  It is not a celebration of the Emancipation Proclamation, but of the day on which news of Emancipation reached a group of Black Texans who were still enslaved two and a half years after it was first signed into law.  As Kevin Young put it in a 2021 opinion piece for the New York Times, "The lesson of Juneteenth is both of celebration and expectation, of freedom deferred but still sought and of the freedoms to come."

Since its inaugural celebration in 1866, Juneteenth (or Jubilee Day, as it was then called) has spread in scope and meaning, amassing a long history and a complicated legacy.  Initially celebrated in Black Texan communities, the holiday spread through the States with the Great Migration.  Juneteenth's initial celebration of emancipation became mingled with fights against newer forms of oppression.  And just last year, it was signed into law as a federal holiday.

Today, Juneteenth brims with hope, joy, and resilience, but also with grief, anger, and the reality that we are still far from racial justice.  While its institution as a federal holiday was met with some criticism, its growing prominence in American culture is a step towards prioritizing Black voices & histories — and deconstructing the myth of America as the "land of the free".

Explore some of our recommended reads below for incredible stories from Black American authors — or check our our Black History Month collection for nine different book lists, sorted by genre.

The 1619 Project: Born on the Water (Hardcover)

An Abolitionist's Handbook: 12 Steps to Changing Yourself and the World (Hardcover)

Ain't Burned All the Bright (Hardcover)

Don't Cry for Me (Hardcover)

The Final Revival of Opal & Nev: A Novel (Paperback)

The Ground Breaking: The Tulsa Race Massacre and an American City's Search for Justice (Paperback)

The Hate U Give: A Printz Honor Winner (Paperback)

The History of Juneteenth: A History Book for New Readers (Paperback)

The Juneteenth Story: Celebrating the End of Slavery in the United States (Hardcover)

The Memory Librarian: And Other Stories of Dirty Computer (Hardcover)

Of Blood and Sweat: Black Lives and the Making of White Power and Wealth (Hardcover)

Oona and the Shark (Hardcover)

The Other Black Girl: A Novel (Paperback)

Stuntboy, in the Meantime (Hardcover)

The Year We Learned to Fly (Hardcover)