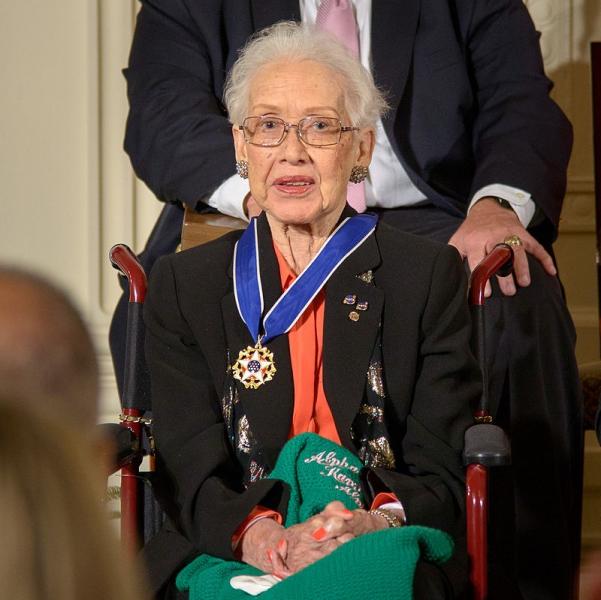 NASA mathematician and Presidential Medal of Freedom recipient Katherine Johnson passed away this week at the age of 101.

Johnson's work was instrumental to many of the most famous space flights in American history, from John Glenn's pioneering orbit to the Apollo 11 moon landing.  Despite the crucial nature of her calculations and her inimitable skill, her work, and that of other women of color working at NASA at the time, went largely unnoticed as the spotlight focused on their white, male counterparts.

Their work was highlighted in Margot Lee Shetterly's book Hidden Figures, which was made into an Oscar-nominated film of the same name.  Johnson, the film's central character, was portrayed by Taraji P. Henson.  Though characters based on other colleagues appeared in the film, including Dorothy Vaughan and Mary Jackson (portrayed by Octavia Spencer and Janelle Monáe, respectively), by the time of the film's release in 2017, Johnson was the only "computer" still living of the cohort of women with whom she had worked.  Hers quickly became a household name and an inspiration for women in STEM fields, especially women of color.

In 2015, when Barack Obama presented Johnson with the Presidential Medal of Freedom, he said that “Katherine G. Johnson refused to be limited by society’s expectations of her gender and race while expanding the boundaries of humanity’s reach,” but Johnson never felt like a pioneer.  As she told Shetterly during research interviews for Hidden Figures, “I was just doing my job."

Nonetheless, her life and work have served as an inspiration for many, and will continue to do so.  Johnson's autobiography, Reaching for the Moon, was written with a middle grade audience in mind, encouraging young readers to strive for their goals regardless of naysayers.  Her life's story has also become a popular topic for nonfiction children's picture books, providing a role model for the next generation of young people.

Reaching for the Moon: The Autobiography of NASA Mathematician Katherine Johnson (Hardcover)

Hidden Figures: The American Dream and the Untold Story of the Black Women Mathematicians Who Helped Win the Space Race (Paperback)