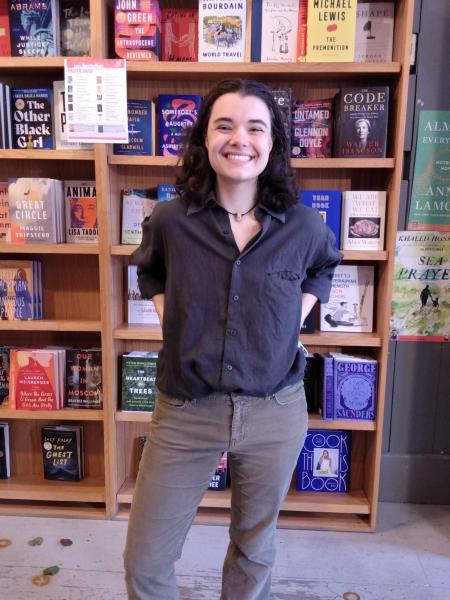 A new face at Brilliant Books, Leo Bevington (they/them) is our web editor & marketing assistant. You'll occasionally see them in store, but more often Leo is holed up in the back office or at home, working with Caitlin to create and manage web content, email campaigns, and more. We're excited to welcome Leo to the Brilliant Books team!

Tell us about yourself:

I grew up in North Carolina, then lived in Chicago for six years (around college), and I finally came to Northern Michigan by way of theater, of all things! Unsurprisingly, I'm a pretty heavy reader, but if I'm not curled up with a book I'm probably prepping for a D&D campaign or throwing a solo dance party.

Top five most interesting things about you:

1. I am the proud (co) owner of seven chickens, all of whom are rebellious but very fluffy, and I love them with all of my heart.

2. I write a lot of music! Nowadays it's mostly influenced by folk & pop, but I once wrote a whole musical.

3. While I am not proud of said musical, I am proud of the (unfinished) Percy Jackson screenplay that I wrote in middle school. I was determined to write and produce the whole movie, and even though 20th Century Fox beat me to it, I'm still convinced that my middle school work was higher quality than whatever they made.

4. I once fit four unpeeled clementines in my mouth. I'm not sure if that's actually impressive, but it definitely felt impressive at the time.

5. I'm a Shakespeare nerd! I used to do a lot of acting, and I've had the pleasure of being involved a good number of Shakespeare (and Shakespeare-inspired) plays. Some of my favorite roles include Romeo and Richard III! I love any show where I get to fight onstage.

What’s on your dream bookshelf?

In my ideal world, I would have a constantly rotating bookshelf! It would be cool to collectively own a library of books, to have a growing collection that is circulated between friends and family. We could all make little notes in the books as we sent them back and forth, so whenever you read a book, you'd share the experience with the previous (and future) readers. There are a few books that I'd need permanently on my own little bookshelf, but for the most part I'd love a collective, rotating library.

Quirkiest job you’ve ever had?

This isn't one particular job, but I used to do a lot of odd jobs for theaters around Chicago. Sometimes I'd get paid to stand on stage so that lighting designers could see what the lights looked like on real human bodies. Other times I'd be the person focusing the lights. There's so much that happens to produce a theater production, and it was a lot of fun to be involved in various little ways.

You’re browsing a bookstore.  What’s the first section you gravitate toward?

Sci-fi and fantasy. I love to explore other genres too, but I never leave a bookstore or library without at least glancing trough this section. I love the giant scopes of these stories, plus I'm so intrigued by how authors imagine new worlds and new societies. I tend to dramatically swing between reading hard-hitting, emotionally exhausting stories and taking refuge in more lighthearted books, often YA.

One book that changed your life:

I feel like every book I read changes me in little ways, and I'm really grateful for those little changes. But one book that really changed the way I think was The Inconvenient Indian by Thomas King. Before I picked up that book at a bookstore in Canada, I was vaguely aware that White American occupation has been incredibly destructive of Native communities, but I didn't know very much of Indigenous history - and completely honestly, I hadn't given it that much thought. For me, The Inconvenient Indian was really the catalyst that got me thinking critically about Native issues and the ways that I interact with erasure and oppression of Native people.