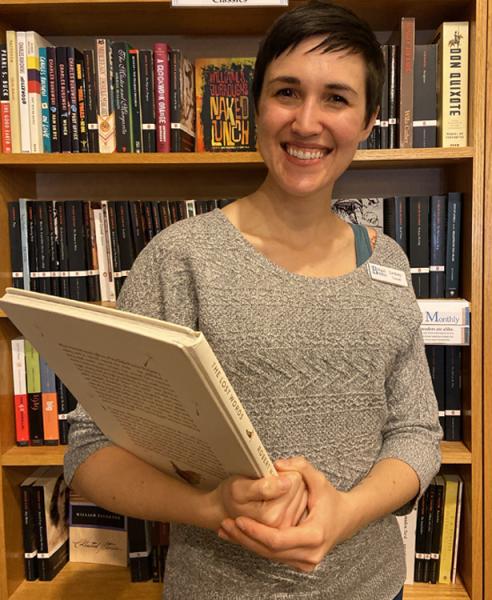 Lindsey is the newest addition to our Brilliant Books team, and though she hasn't been here long, you'd never know it from her expertise.  From quintessential classics to funky new fiction, Lindsey has a knack for recommendations.  Stop by and see what she recommends for you!

Tell us a bit about yourself:

I am the proud adoptive mama of two pit bull rescues, born and raised about an hour west of Chicago - roughly equal distance between the Loop and farm country.  I moved to Traverse City in June of 2015 after attending a small liberal arts college in Rock Island, IL, getting my Master's degree in Classical Philology (Greek & Latin) from the University of Cincinnati, and working for several years in the hospitality industry back in Chicago. After a stint in banking, I have happily landed here at Brilliant Books, though I can also still be found slinging wine behind the bar at Left Foot Charley in the old state hospital.

What's the quirkiest job you’ve ever had?

The summer after I graduated from college I worked part-time at the local public radio station WVIK for a program that provided information from local newspapers to folks that were visually impaired.  Basically, they would get a free receiver from the station, and every afternoon volunteers would read different sections of the newspaper over the airwaves.  The segment I did every day was called "News of Neighbors," which essentially entailed reading out the daily obituaries.  (Sometimes there was time to get to the wedding and birth announcements, though, which was always nice!

Tell us about meeting a favorite author

While I was in grad school, I got to see Alexander McCall Smith at the Cincinnati Public Library.  I actually don't remember what book he was promoting at that time, but I do remember all the charming and memorable things I was going to say to him while he was signing my copy of Unusual Uses for Olive Oil.  And how I got as starstruck as Lucy Ricardo when I actually got to the signing table, and barely said anything.  Yup, definitely remember that.

You’re not allowed to read for 24 hours!  What would you do?

Probably a mix of really active and really lazy things - kickboxing, yoga, and hiking, then baking, jigsaw puzzle, and movie. Or possibly a Star Trek binge.

What’s one thing you wish more people knew about being a bookseller?

There's a LOT of books out there!  I hate to admit it but... we haven't actually read them all.