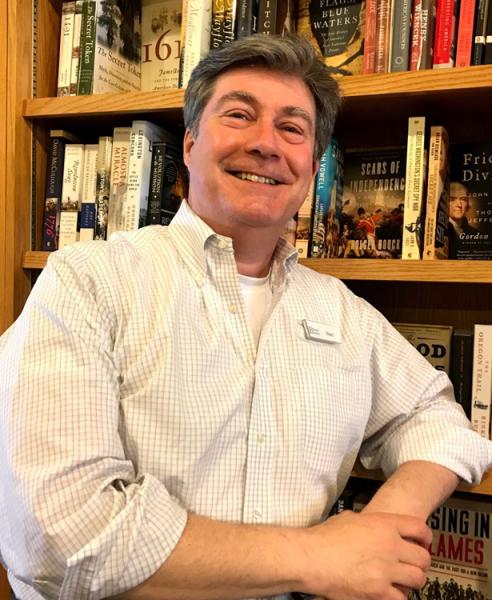 Peter Makin is Brilliant Books’ owner.  He is English and still has the accent to prove it.  He emigrated to the US twice, once in 1981 and again in 2006 when he returned after a 15 year absence.  He is now an American citizen, but is eternally grateful to live in an era of streaming football—er, soccer—services.

How many states (or countries) have you lived in?

What's the one thing you wish people knew about bookselling?

People warn you before you open a bookstore.  They tell you that once you own a bookstore you won't have time to read.  They are right.  It's why more booksellers than you might imagine listen to books rather than actually read them.  My 20 minute commute is my reading time.  Also, and most importantly, It is by far the most fulfillng job I have ever had - and I have done all sorts of weird things.

What would you say are the top five most interesting things about you?

If you weren't a bookseller what would you be doing instead?

What's one book that changed your life?

The Watercourse Way by Alan Watts

Peter is also one of our Brilliant Books Monthly book selectors.  Learn more about how he chooses books for our nonfiction readers!

Nobel Prize winner Kahneman's 2011 masterwork Thinking, Fast and Slow is enjoying a well deserved renaissance on the bestseller lists.  He explains the two ways we think: first swiftly and intuitively, from the gut, and second more analytically and with consideration.  It turns out humans are very good at making bad decisions.  We allow emotions and preconceived values to triumph over consideration and logic.  When read with Gladwell’s Blink one comes to understand why, as Gladwell puts it, unless you have the 10,000 hours of training and experience to decide in a blink, it's probably best to slow down and think.

White Fragility: Why It's So Hard for White People to Talk About Racism (Hardcover)

Brilliant Books’ 2020 best seller.  An examination by Robin DiAngelo of how and why white people are uncomfortable discussing and confronting racism.  Despite well meaning white claims of color-blindness, Diangelo illustrates how racism is part of the culture, not an aberration of it.  For white people to accept this reality implies acknowledging the racist implications of their own thoughts and deeds.  This in turn leads to defensiveness, anger, denial, all of which shut down any progress in race relations.

Spolier alert:  White people are not supposed to find discussing race comfortable at all. —Peter

How to Decide: Simple Tools for Making Better Choices (Paperback)

Annie Duke follows up on her 2018 best seller, Thinking in Bets: Making Smarter Decisions When You Don't Have All the Facts.  As a former poker player she her outlines how best to make decisions when you do not have all the facts, when you’re armed only with ideas, conjectures and predictions.  —Peter