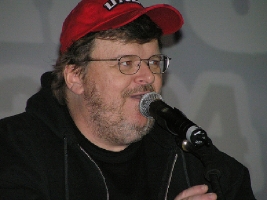 We are proud to number Michael Moore among our fans.

While most of you know him for his movies, here in Northwestern Michigan he is known as the driving force behind the re-opening of the historic State Theater in downtown Traverse City in November of 2007.

Since then he has been a frequent visitor to our little store - although we probably go to the movies at The State Theater more often than he comes to Brilliant Books. We go every Tuesday for free popcorn night.

Michael Moore-Oscar-winning filmmaker, bestselling author, and the nation's official provocateur laureate-is back, this time taking on an entirely new role, that of his own meta-Forrest Gump. Smashing the autobiographical mold, Moore presents twenty-four far-ranging, irreverent, and stranger-than-fiction vignettes from his own early life. One moment he's an eleven-year-old boy lost in the U.S. Senate and found by Bobby Kennedy; and in the next, he's inside the Bitburg cemetery with a dazed and confused Ronald Reagan. Fast-forwarding to 2003, he stuns the world from the Oscar stage by uttering the words "We live in fictitious times . . . with a fictitious president" in place of the usual "I'd like to thank the Academy." And none of that even comes close to the night the friendly priest at the seminary decides to show him how to perform his own exorcism. Capturing the zeitgeist of the past fifty years, yet deeply personal and unflinchingly honest, HERE COMES TROUBLE takes readers on an unforgettable, take-no-prisoners ride through the life and times of Michael Moore. Alternately funny, eye-opening, and moving, it's the book he has been writing-and living-his entire life.

A must for the Obama Election collector

After a disastrous war, the failure to catch bin Laden, millions of families who have lost their homes, the Katrina debacle, soaring gas prices feeding record oil company profits, and the largest national debt caused by the biggest spending and borrowing administration in American history, the country has had it with conservatives, right-wingers and Republicans. It's a great year to be an American and a voter. Don't miss out on all the fun! And don't miss out on MIKE'S ELECTION GUIDE.

THE OFFICIAL GUIDE TO FAHRENHEIT 9/11 The Cannes Film Festival jury voted unanimously to award the 2004 Best Picture Award to Michael Moore and Fahrenheit 9/11. Since then it has gone on to smash all box office records for a documentary and created an international discussion about the Bush administration and the war in Iraq. "The Official Fahrenheit 9/11 Reader" is a powerful and informative book that includes the complete screenplay of the most provocative film of the year. The book also includes extensive sources that back up all facts in the film, as well as articles, letters, photos, and cartoons about the most influential documentary of all time.

Just in time for the U.S. presidential election comes the paperback edition of the #1 "New York Times" bestseller. Michael Moore tells what has gone wrong with America and maps out what regular citizens can do to reclaim their stolen country.

Stupid White Men: ...And Other Sorry Excuses for the State of the Nation! (Paperback)

In the winter of 2002, "Stupid White Men" took America -- and the world -- by storm. Tired and skeptical of George W. Bush's high approval rating, frightened by the implications of the Enron scandal -- and generally just looking for a voice of honest dissent in the thick atmosphere of jingoism that followed 9/11 -- book buyers from coast to coast swiftly embraced Michael Moore's in-your-face anti-Bush-era manifesto, making it one of the bestselling nonfiction books of the year. With an unerring eye for greed, hypocrisy, and corruption, Michael Moore takes on the whole ugly mess of America at the dawn of the twenty-first century. Whether he's demanding U.N. action to overthrow the Bush Family Junta or calling on African Americans to place whites only signs over the entrances of unfriendly businesses, "Stupid White Men" is a pitch-perfect skewering of our culture of Malfeasance and Mediocrity.

Downsize This!: Random Threats from an Unarmed American (Paperback)

Americans today are working harder, working longer and yet for most of us, in this time of ruthless downsizing and political cronyism, job security, a decent standard of living and a comfortable retirement are becoming harder and harder to find. In this brilliantly funny and right-on-target diatribe, irreverent everyman Michael Moore gives his own bold views on who's behind the fading of the American dream. Whether issuing Corporate Crook trading cards, organizing a Rodney King Commemorative Riot, sending a donation to Pat Buchanan from the John Wayne Gacy fan club (which was accepted) or trying to commit former right-wing congressman Bob Dornan to a mental hospital, the in-your-face host of TV Nation and director/star of Roger &Me combines an expansive wit with biting social commentary to make you think and laugh at the same time. In hardcover, Downsize This stormed the bestseller lists of the New York Times, Wall Street Journal, Washington Post, San Francisco Chronicle and others. Given Michael Moore's enormous -- and growing -- constituency, this trade paperback edition brings his unique perspective on the nation to an even greater audience.

Adventures in a TV Nation (Paperback)

Based on an American television show, of the same name, it brims with Michael Moore's special brand of subversive humour that melds outright silliness with poignant realisation. From the oh-so-obvious Serial Killer Next Door who's ignored by his neighbours: to Mike enjoying some quality time with Dr. Kevorkian: to raising money for Charles Keating, this is a compilation of classic TV Nation that'll make you laugh and think at the same time. This book is a must read for anyone and everyone.