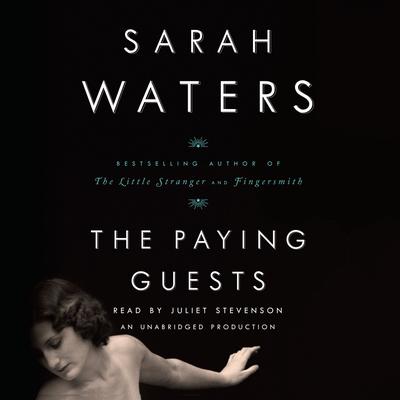 As a long time fan of audiobooks, I was particularly excited to come across a Libro.fm audio edition of The Paying Guests, written by one of my favorite authors, Sarah Waters, and narrated by the excellent English actor Juliet Stevenson.

The book isn't new—it was first released in print and audio in the US in 2014.  The audio edition has just now been released for wider audiences, however, and I'm glad that more people will get the chance to enjoy it, because this is one of those performances that adds unlooked for nuance to the story being told.

I have often advocated for the format of audio because of the depth of place and character a good voice actor can convey. Juliet Stevenson is one such actor.  Primarily a stage actor, Stevenson won an Olivier for her performance in Death and the Maiden, and has been nominated a further five times.  Even without the visual element of acting, her skills are apparent in her ability to present the myriad characters of The Paying Guests as distinct individuals. She masters the English class accents and sensibilities to perfection, conveying pain, terror and trepidation as effortlessly as she does love and sensuality.

As for the text of the novel, Sarah Waters has earned a reputation for historical fiction founded on thorough research and detailed world building. Here she has delivered again. A sweet, sensual, but not explicit, love story, a fraught crime story, and an exquisitely compelling portrait of a fascinating time and place: Britain after the first world war; young men and servants gone; the middle class struggling to make ends meet; a previously reliable class system diminished to its formalities; disillusioned former servicemen seeking a purpose.

The novel brings these elements together, but it's Stevenson’s narration that makes the joins seamless.  She colors the world that Sarah Waters has created.  You feel the pain, you experience the tenderness and are fraught with trepidation.  This is what a good actor can bring to audiobook. If you've never tried them download the app and give it a shot today—you might be more than pleasantly surprised.

Learn more about Juliet Stevenson's work as an audiobook narrator in this profile from AudioFile Magazine, or explore the books she's read on Libro.fm