A New Title for Melissa's Story 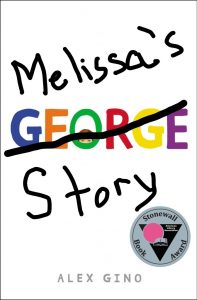 Alex Gino's debut novel was a hit from the start.  With four starred reviews and a number of honors including a Stonewall Award and a Lambda Literary Award, both critics and readers loved the story of Melissa, a middle grade girl who was then named George.  That book, of course, was George, which, since its release in 2015, has been a staple of LGBTQ+ reading lists, especially for young people.  But, as Gino has explained, this iconic book of support for the trans community is not without its flaws.

"I made a mistake when I named my first published middle grade novel. A big mistake," the author wrote in a recent blog post.  "The title of my book makes it seem as though it is ever okay to use an old name for a person when they have provided you with a different name that works better for them. I want to be clear—it isn’t."

To more appropriately acknowledge the character's identity, and to remind all trans people that their names and pronouns should be respected, Gino has asked that George be renamed Melissa's Story. Though it's unlikely that the book will be officially renamed, especially since it's been in publication for some time, many readers, bookstores, and libraries are taking the matter into their own hands.  While bookstores and libraries are adding the alternate title to their databases, readers (with Gino's blessing) are getting creative in altering their books' covers to reflect the update.  Check out the Twitter hashtag #SharpieActivism to see some of that creativity in action!  Librarian Ashlee Brown even created an alternate, printable dust jacket that readers can download to correct their books.

While the possibility of renaming the book officially is still rather slim, Gino remains hopeful.

"Well, maybe we’ll hit a cultural tipping point where the social outdatedness of calling a trans girl by her name assigned at birth makes the need for the change obvious," they wrote.  "I’m not actually that hopeful of that, but also, I never expected to see gender-neutral bathrooms in elementary schools, and yet, here we are...